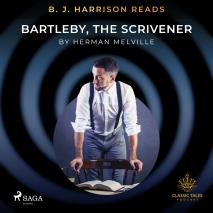 by Herman Melville
The narrator of this story is a successful lawyer on Wall Street. He hires a scrivener named Bartleby to help him with all the papers and relieve the load of work. Bartleby quickly gains the lawyer’s trust by completing his tasks on time. However, the newcomer becomes mentally unstable. He suddenly refuses to perform his duties and stares at a blank wall instead. The lawyer decides to give Bartleby a break, then tries to fire him, but the uncontrollable employee refuses to leave.

Who exactly is Bartleby? Why does he refuse to perform the tasks he has been hired to do? What is his problem? How is the lawyer going to deal with the scrivener? Will Bartleby ever leave?

Find all the answers in Herman Melville’s novel "Bartleby, the Scrivener" from 1853.

Herman Melville (1819-1891) was an American author whose books were based on his own experiences as a sailor. Today Herman Melville is world famous for his novel "Moby Dick" but in his lifetime, this novel was ill received and quickly forgotten. Not until many years after Herman Melville's death did "Moby Dick" get rediscovered become what is today considered one of the greatest classics in American literature. Melville, along with authors such as Nathaniel Hawthorne, Ralph Waldo Emerson, Henry David Thoreau and Walt Whitman, was part of the American Renaissance – a literary movement that aimed to provide literature for the American democracy.