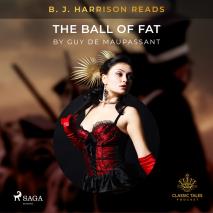 B. J. Harrison Reads The Ball of Fat

by Guy de Maupassant
Rouen is occupied by the Prussian army and a group of ten residents decides to leave town. Although it is not that easy, they manage to get on a carriage. The group is quite colorful as every person represents a different part of the French population during the Franco-Prussian War of the late 19th century. A prostitute is a part of the group and although the others are filled with prejudices towards her, she is the one who could save them all when they find themselves in a Prussian-held territory. Will she put herself before the others and how will they react to this? Find out in "The Ball of Fat".

Guy de Maupassant was a French author who lived in the period 1850-1893. He is best known for his short stories but he also wrote novels, travel books and poems. His work depicts human lives and social conditions, but often through a pessimistic point of view. His first publication "The Dumpling" (1880) is considered to be one of his masterpieces. Other works by Guy de Maupassant include "Mother Savage", "Bel-Ami" and "The Tellier House". He wrote over 300 short stories during lifetime and as such is called "the father of the modern short story".