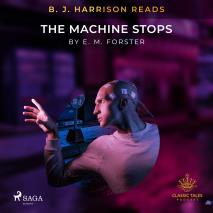 by E. M. Forster
The major part of the human population lives under the surface of Earth. Humankind has created a Machine which meets all possible needs. Travelling is permitted but people do not feel the need for it. Everybody lives in a separate room and communication is made via messages and videos only. However, not everyone is content with this life. There are rebels like Kuno who want to explore and get out of the limitations set by the Machine. Kuno will try to escape but without success. The Machine’s power and dominance over people gets stronger day by day. Until one day it stops. Then people finally realise what truly matters. But is it too late?

E. M. Forster was an English writer who lived in the period 1879-1970. His literary legacy consists of novels, short stories, essays and librettos. He often depicted the differences between social classes and the difficulties in human connection. He was described as "brilliantly original", as a person "pulsing with intelligence and sensibility". Some of Forster’s best known works are the novel "A Room with a View", "The Machine Stops" and "A Passage to India". His reception was so god that he got nominated for Nobel Prize in Literature sixteen times.